I have just returned to Sheffield from my home in Lincolnshire where I spent the Easter Hoidays; one of the things I miss most about my home in the rural village of Utterby is the garden and being in such close proximity to wildlife, as apposed to being in close proximity to trams and sirens in Sheffield! I managed to get out into the garden a few times when the sun briefly came out, and I wasn’t working, to capture some of the nature on my doorstep.

The sun brought out a few insects who were still willing to bear a slight spring time chill, giving me a chance to have a good play with the 70-300mm with a raynox dcr-250 extension lens attached. Unfortunately there is some quality loss, and focusing becomes pretty challenging, but for something that cost £40, you can’t really go wrong! 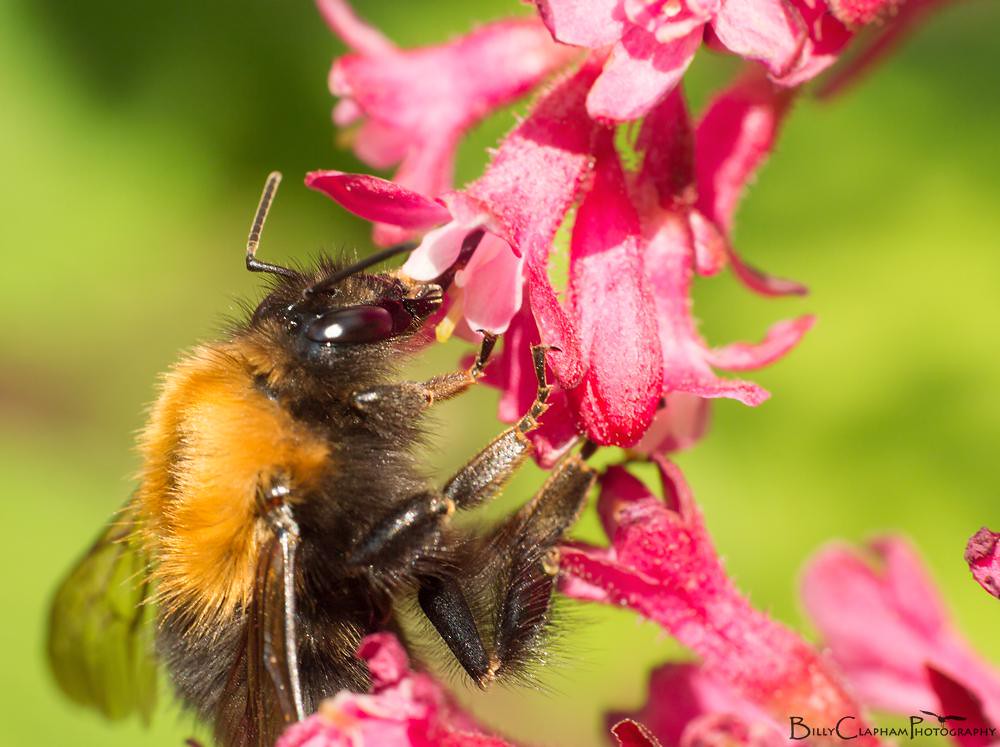 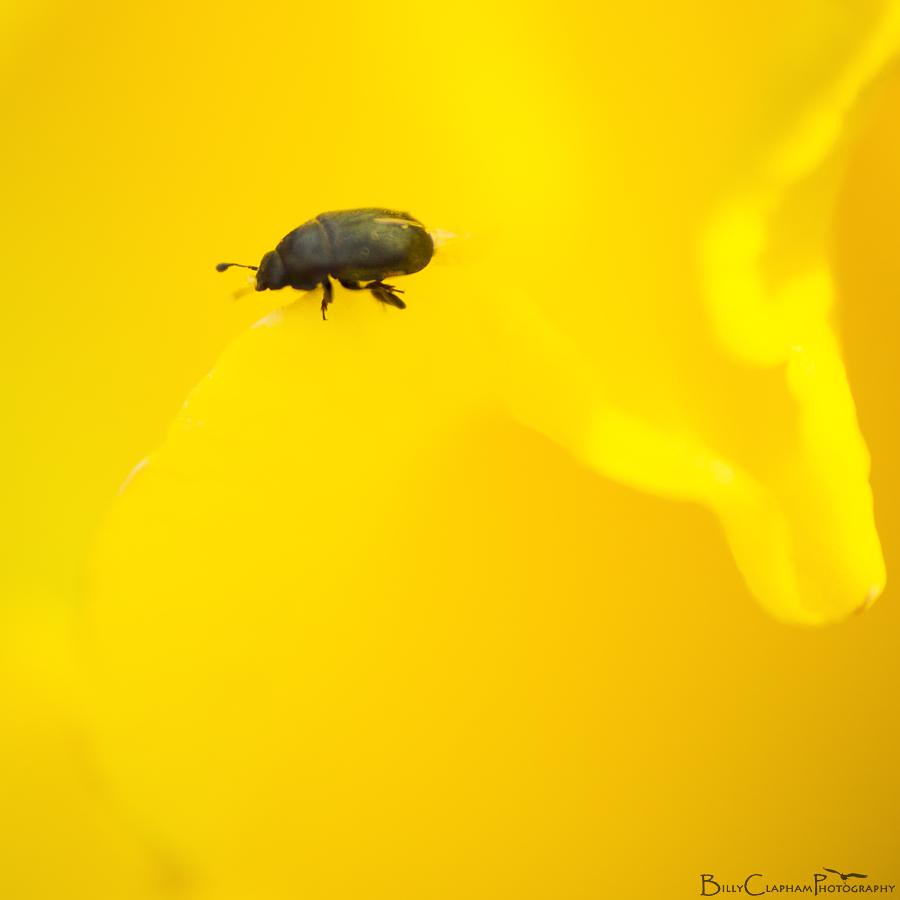 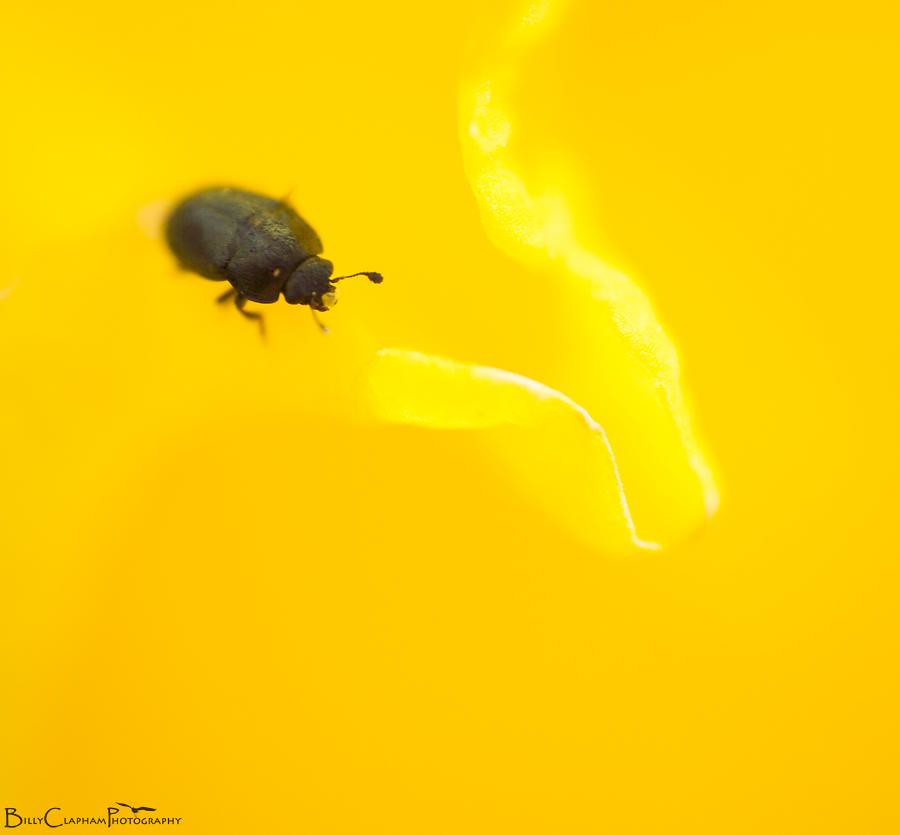 By far the commonest bird species in the garden is the House Sparrow, when they have all bred in the summer and there’s lots of fledglings around there is tonnes of them! I think we have four nesting families this year, three in a terrace nest box and one family in a little nest box originally intended and designed for blue tits! 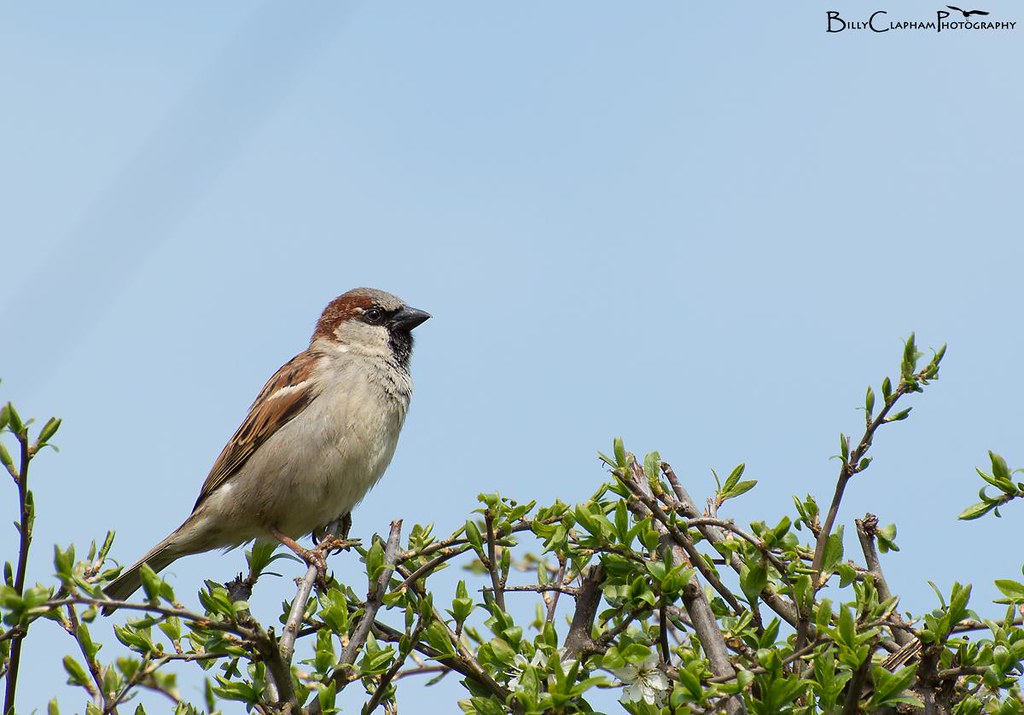 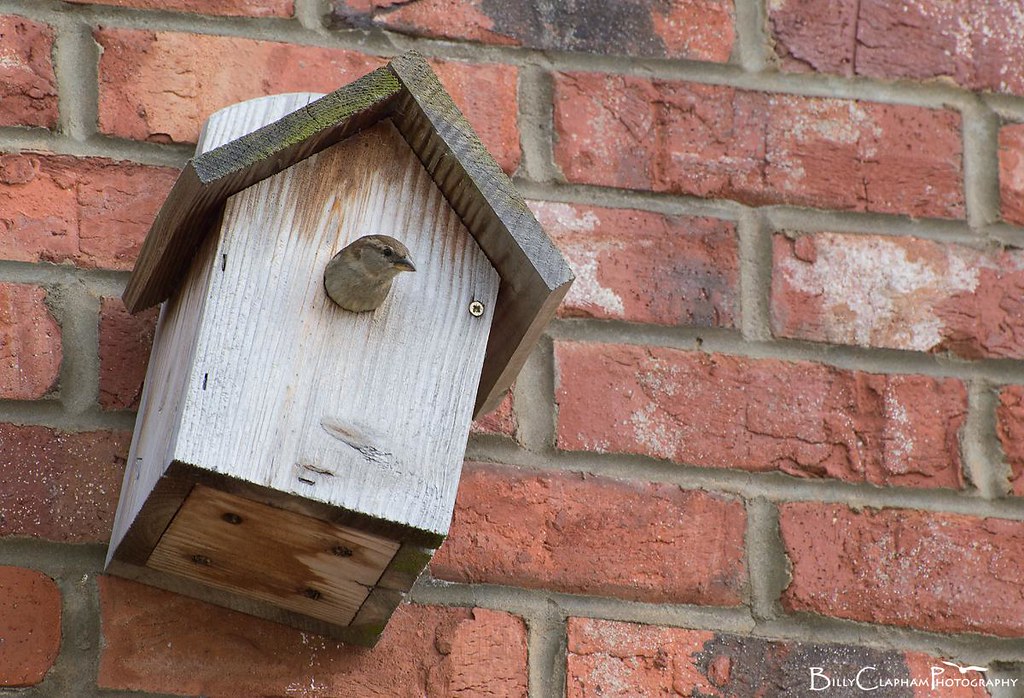 We have fed the birds in the garden for many years and gradually we are attracting some more exotic characters such as the now regularly visiting goldfinch. But this year my favourite garden bird, by a long way, became our resident female blackbird. Completely unassuming, and yes a little dull, but this female seems very used to human presence, happily going about her business when my parents did the gardening. On Easter Sunday I decided to get out into the garden and see if I could get some shots of her going about her motherly duties while the sun was out, she obliged brilliantly!  The 70-300mm is quite a modestly sized lens for bird photography, but this bird came close enough for plenty of frame filling shots. 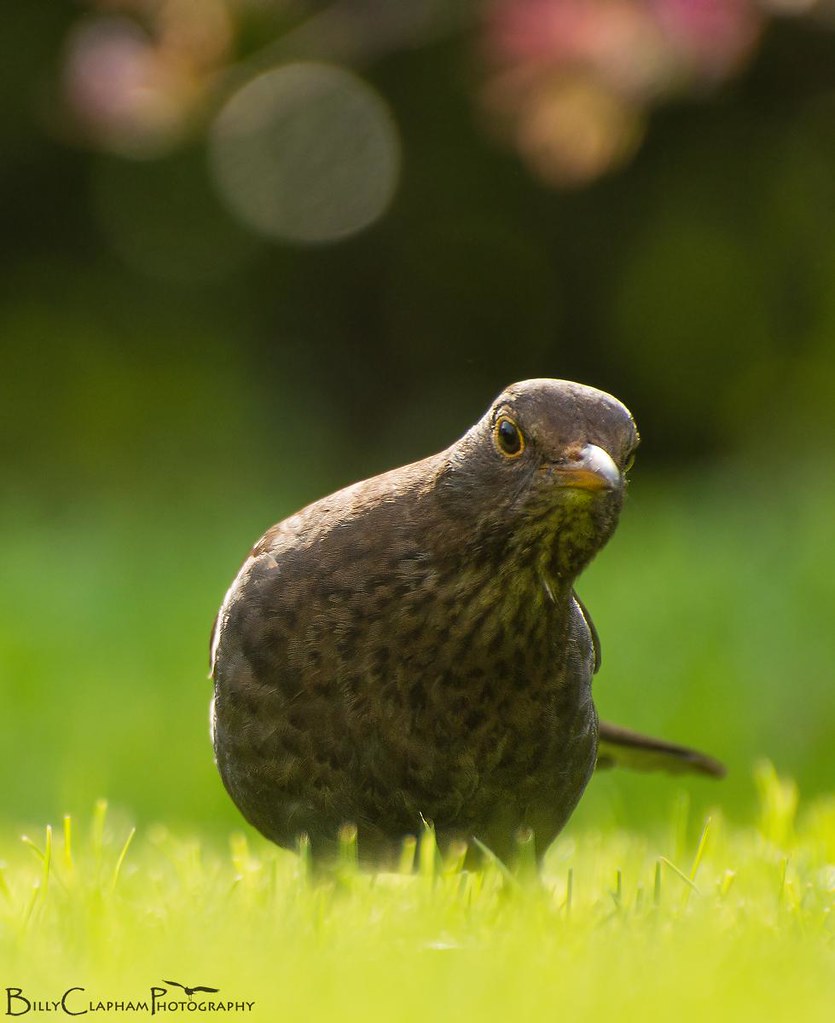 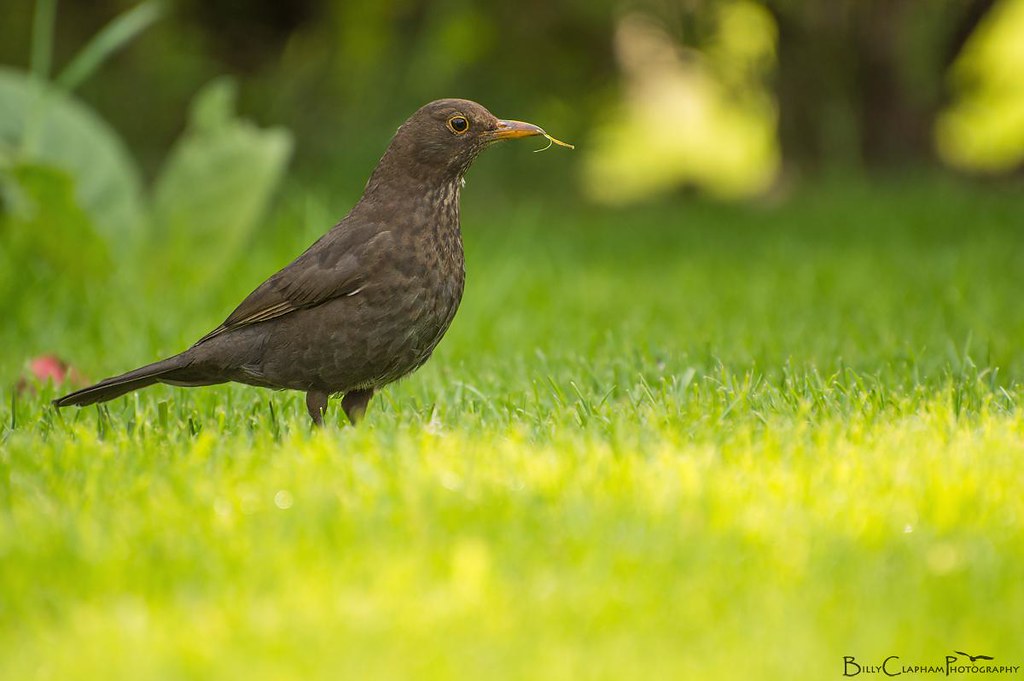 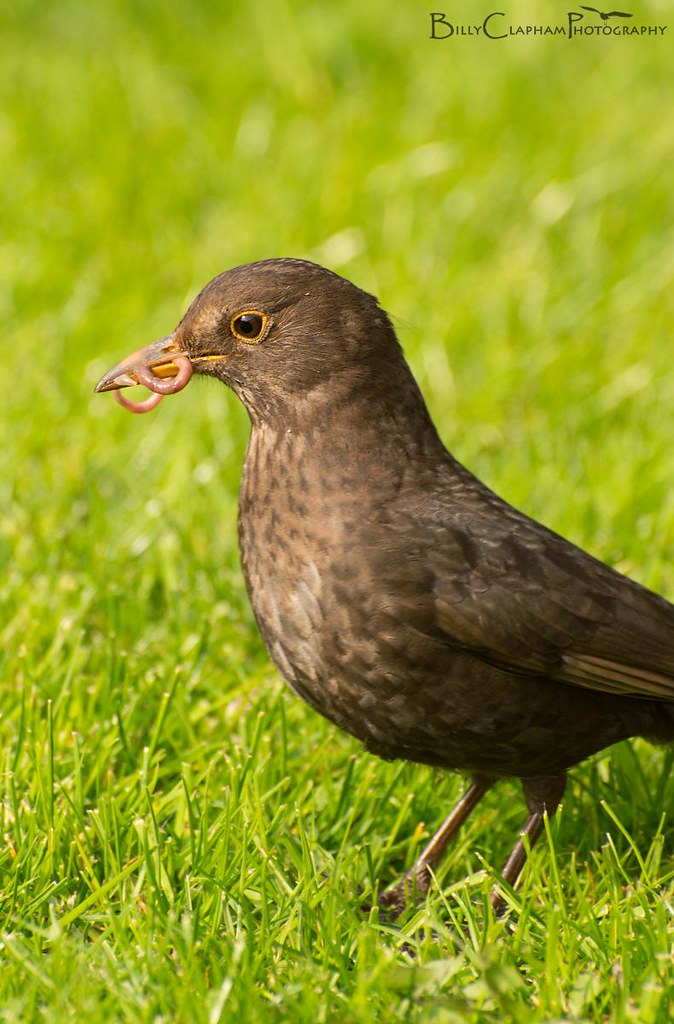 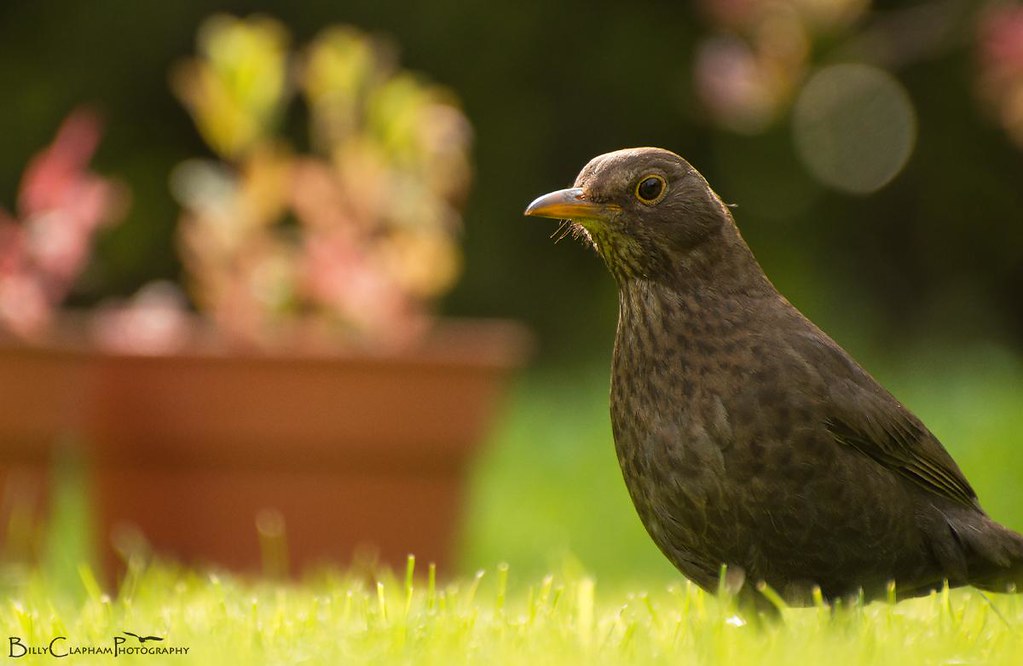 I used dried mealworms to try and lure her in closer and closer to get some more intimate shots. 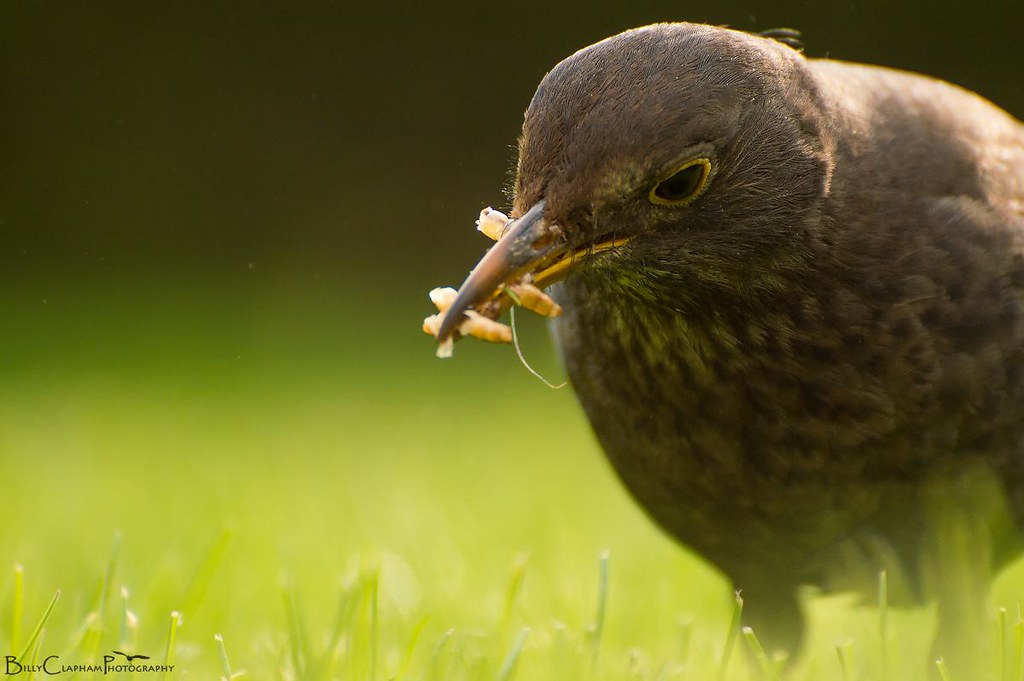 But it was when she started getting too close for the 70-300mm to focus that I realised the potential intimacy of the shots I could have with this bird! Inspired by some amazing wide angle red squirrel shots I had seen a while back by Will Nicholls, I removed my 70-300mm, stuck on my 18-55mm kit lens, liberally scattered some meal worms in front of it… and waited. I didn’t have to wait too long for her to oblige! 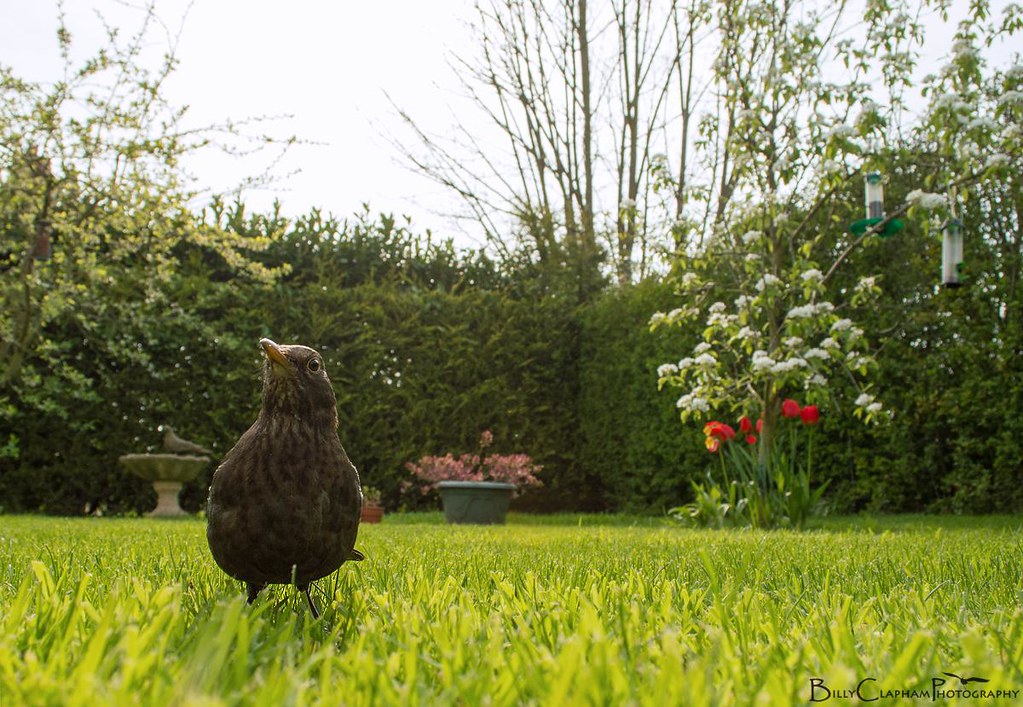 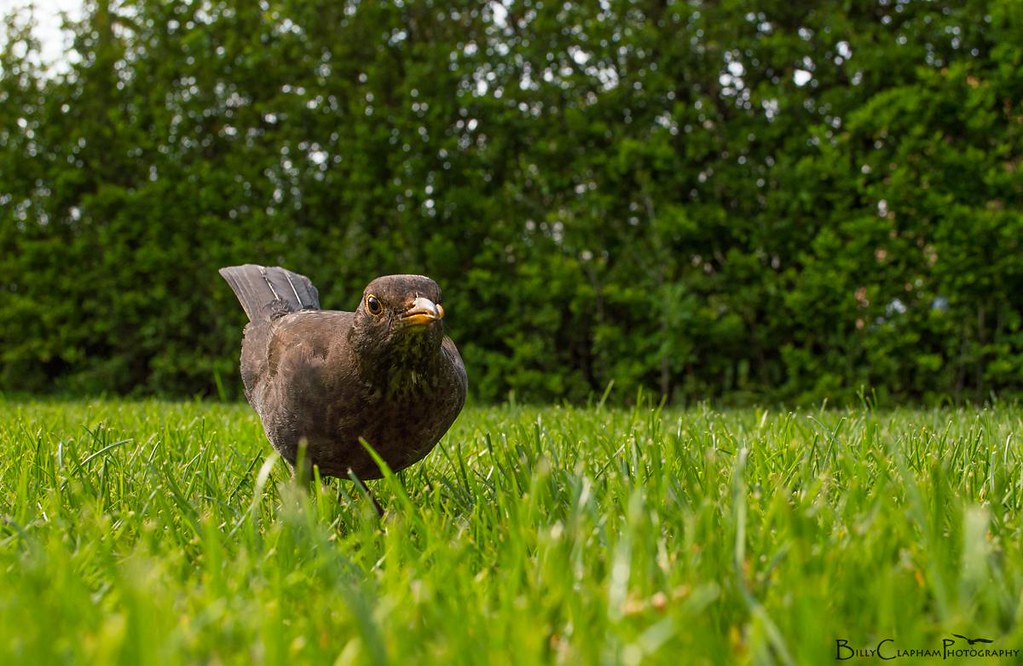 I even attempted to hand feed her, but she just never quite went for it, I bet she would have if I had tried for longer, but I decided to concentrate on shots which didn’t have my ugly pale human hand protruding in, instead! (and lying in such an awkward position was giving me cramp…) 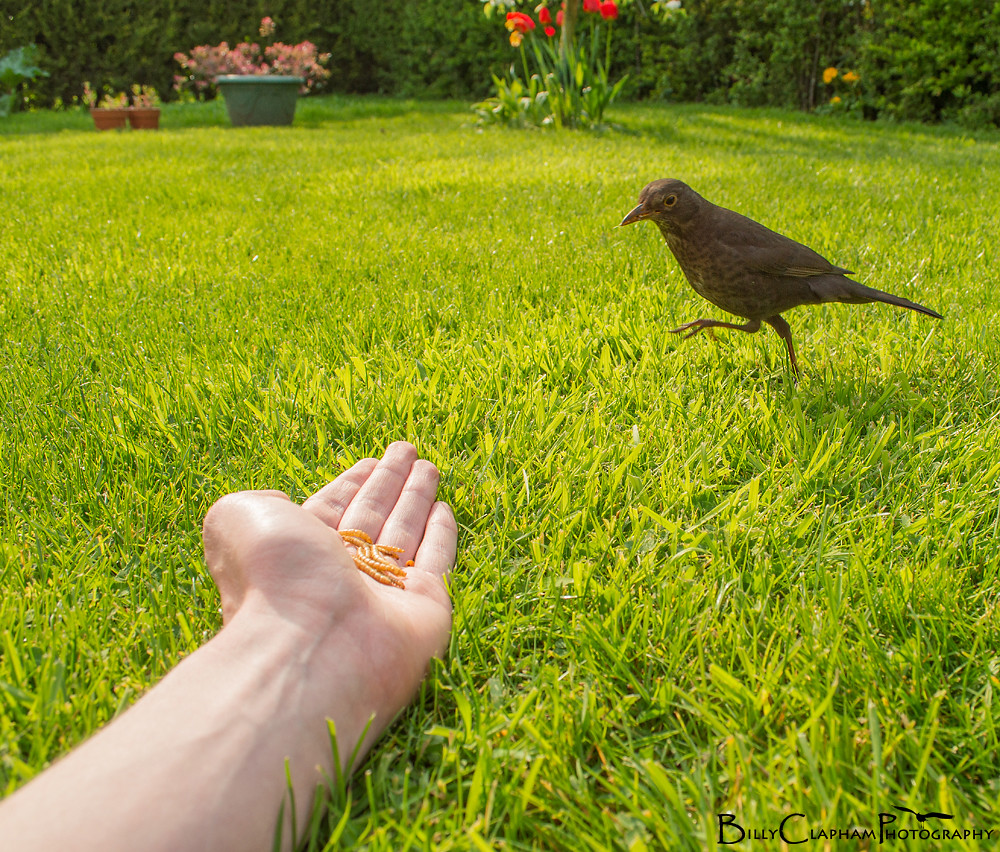 The sun began to fade behind the clouds, so I decided to return the next day to try again with some better light and attempt to get an improved shot….

“Animals in their Environment” has always been one of my favourite styles of wildlife photography, and while its not exactly a Polar bear in the Arctic or an Ibex in the French Alps, I thought there was still potential here for a shot of a blackbird in the context of a suburban garden. I walked around the garden and scouted for the best light and what I thought would make an interesting backdrop for the blackbird to feed in front of. I eventually settled for one of our blossom trees and the clothes laden washing line for that humanised context! So i scattered some dried mealworms, laid down on some old plastic bags, and waited for her to arrive. Once again, it didn’t take long! 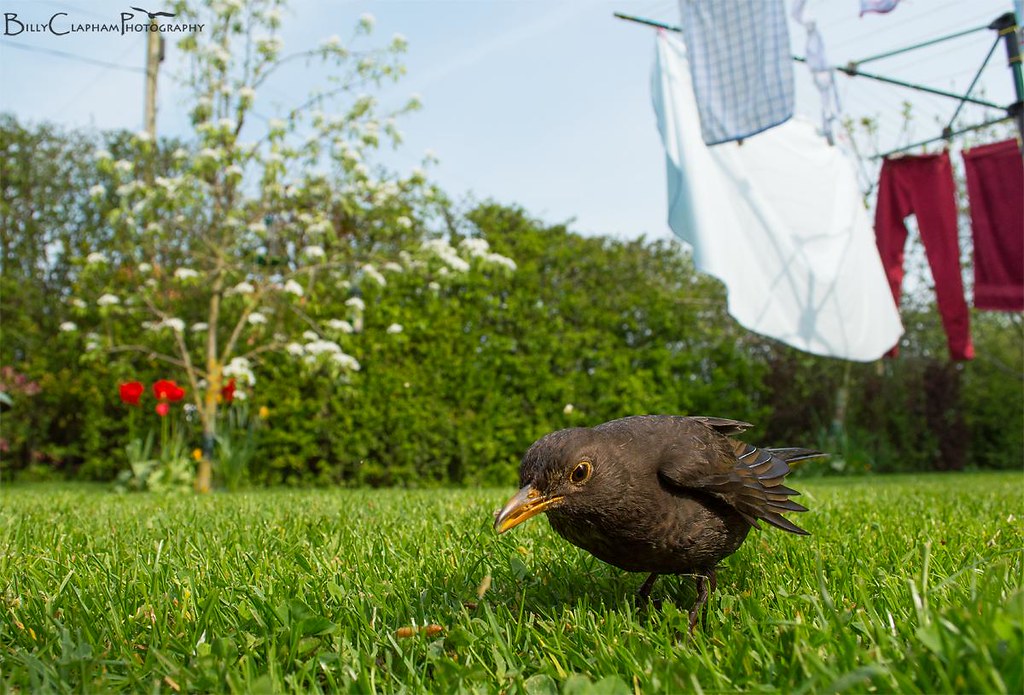 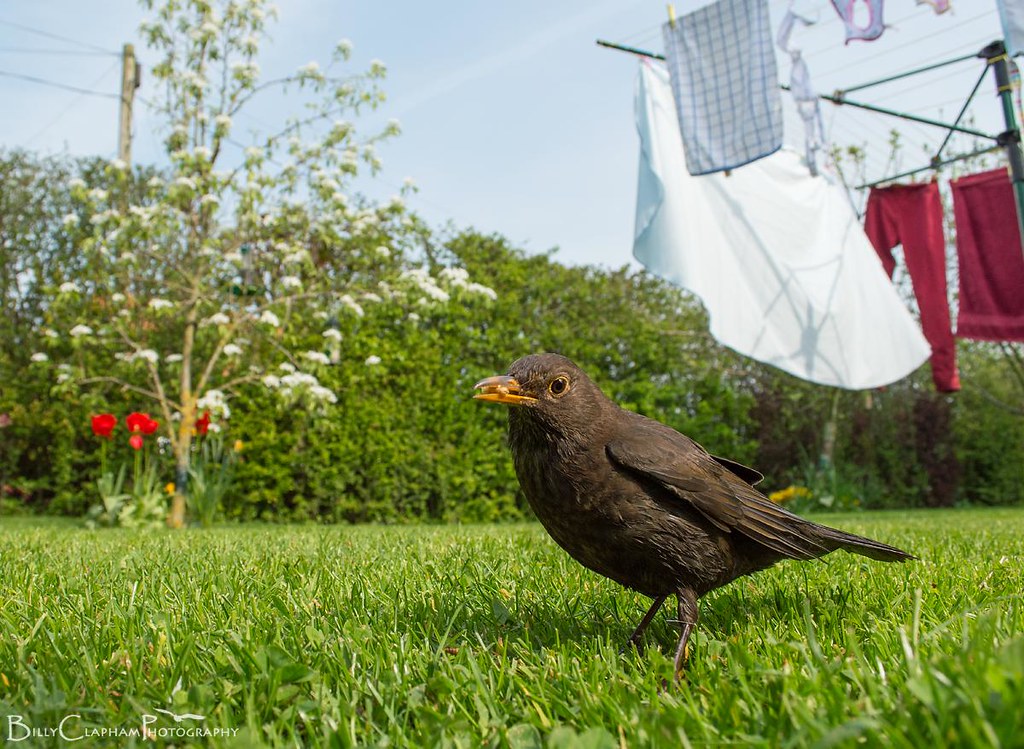 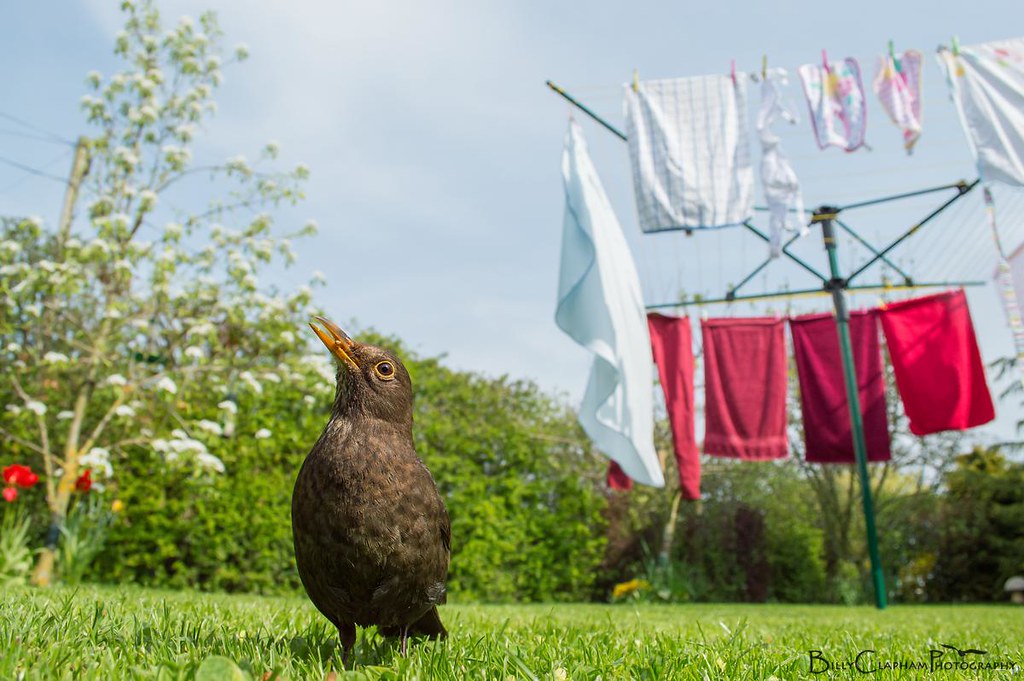 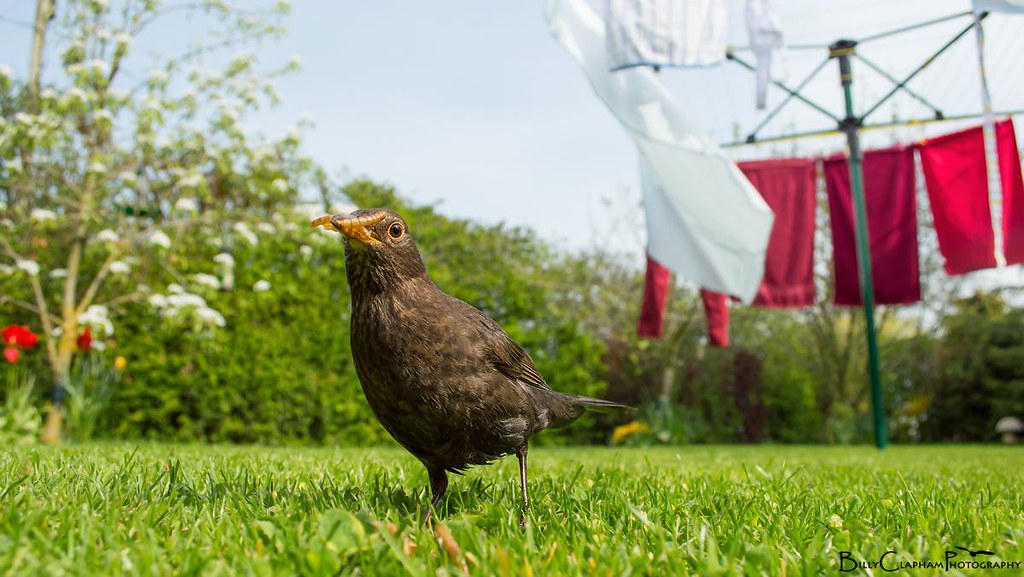 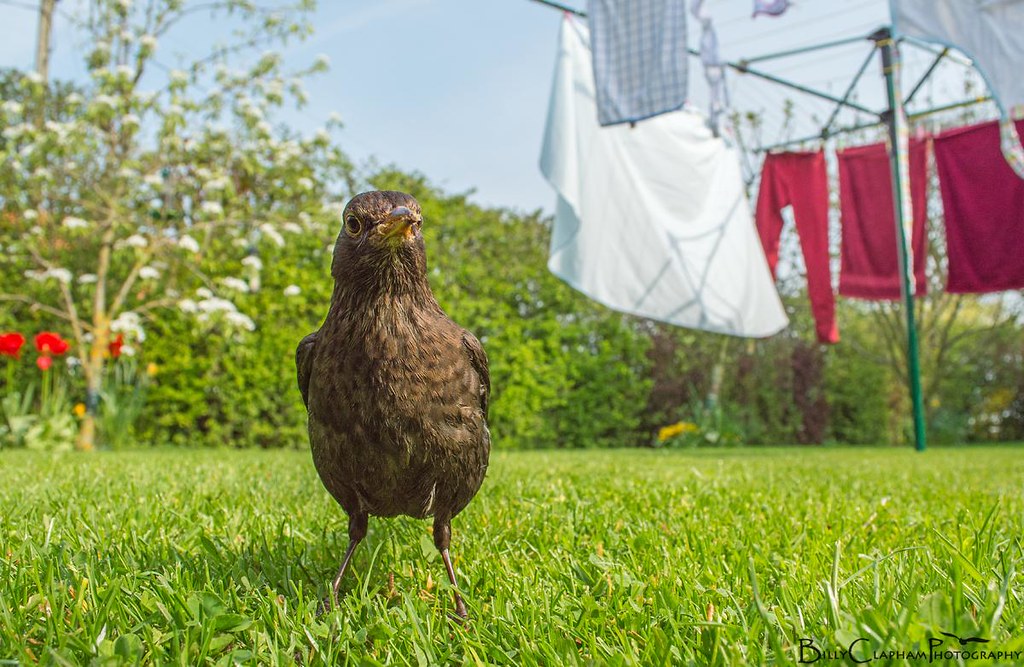 I couldn’t resist a couple more telephoto shots as well though, when she wasn’t right up in my face! 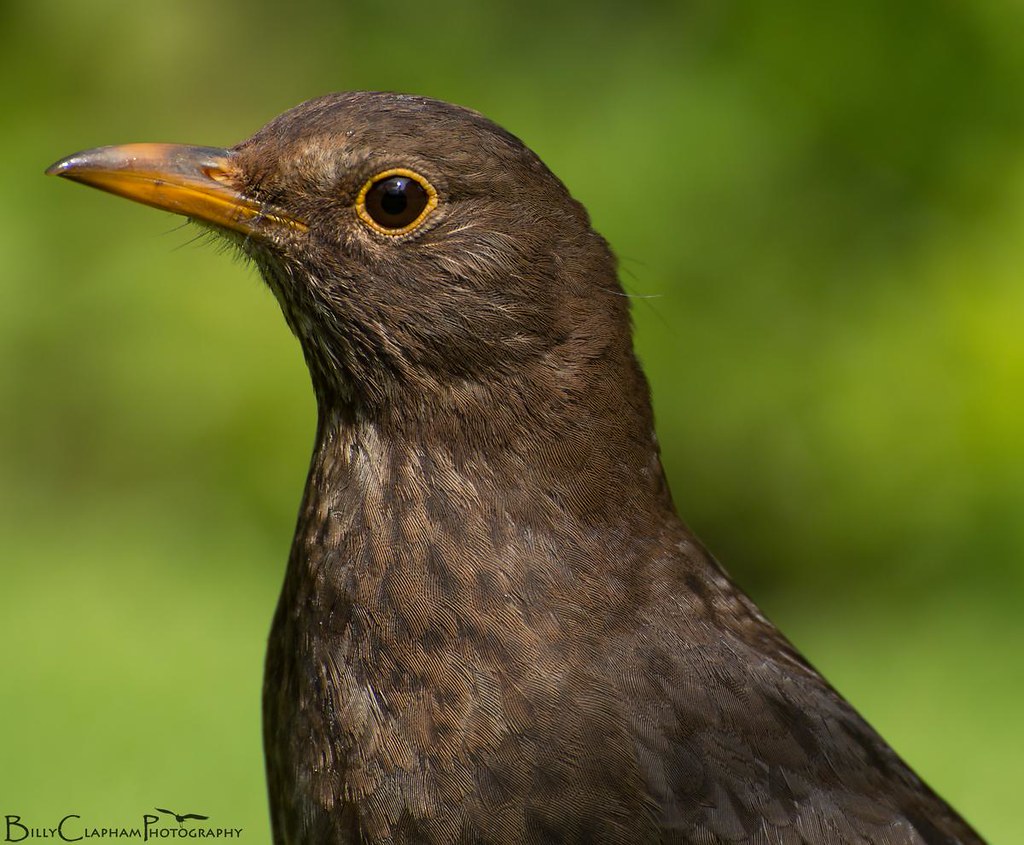 There’s something a bit velociraptor about this shot… just me? OK! But birds are essentially very derived dinosaurs, look it up! 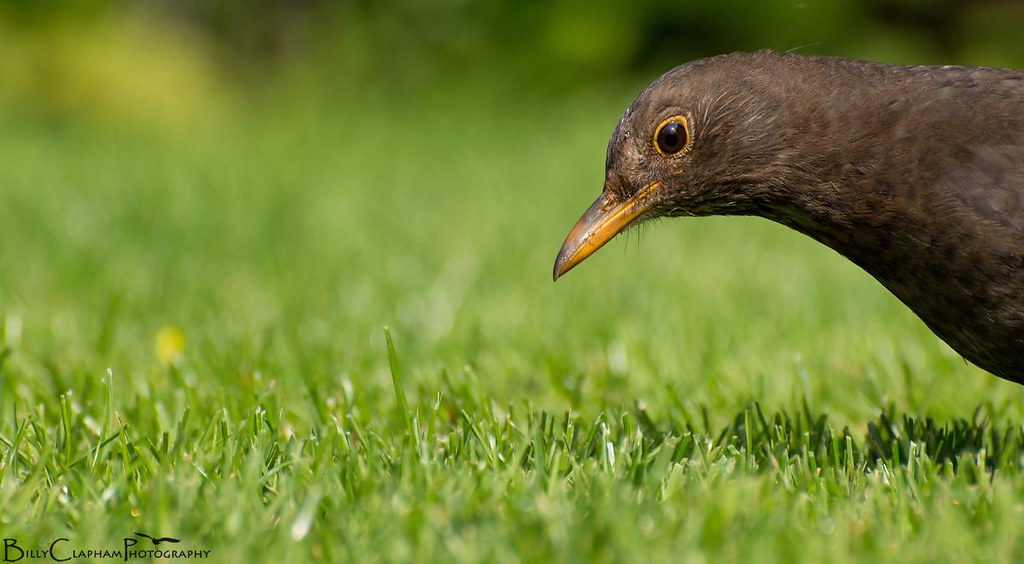 It was amazing to photograph a bird so close up on it’s own terms, often too close for even my kit lens to focus; she might have only been a blackbird, but this definitely ranks up there as one of my best wildlife experiences! As the sun rose higher and started making lighting conditions harsher I decided to call it a day for blackbird photography and head inside to look at my shots. But just as I had almost finished packing away my set up, a little dunnock came and took a bird bath right in front of me; neatly topping off a great couple of days of wildlife photography! 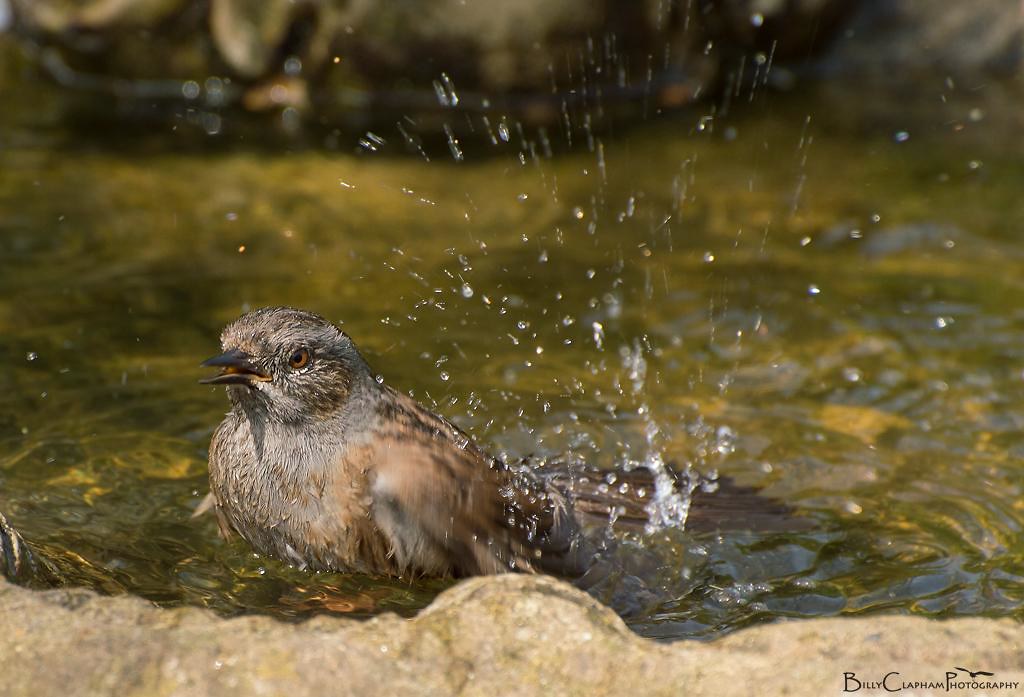 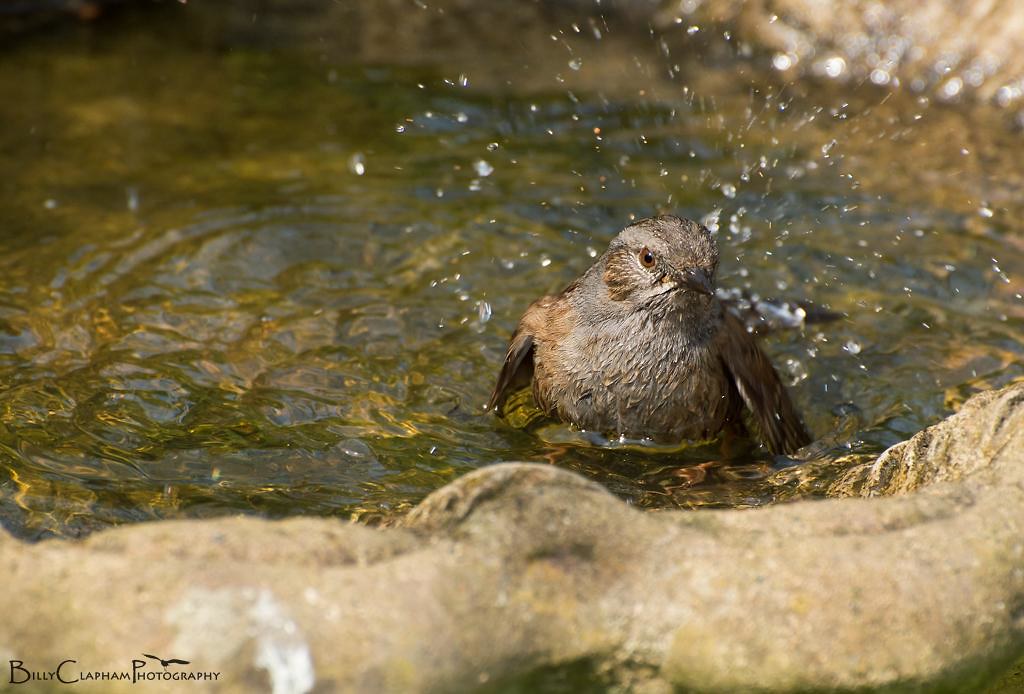 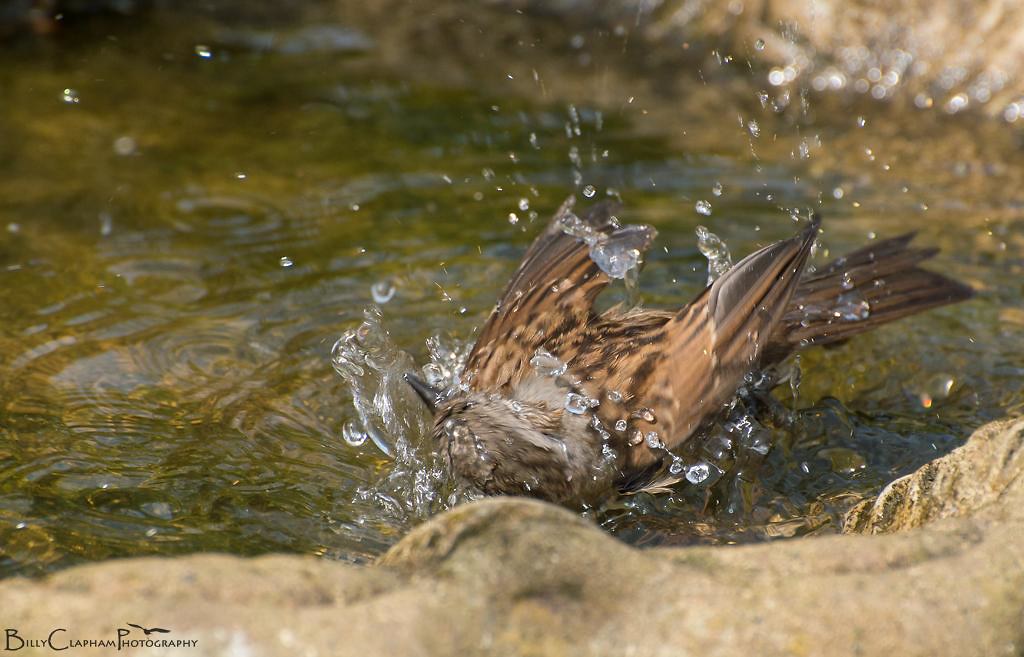 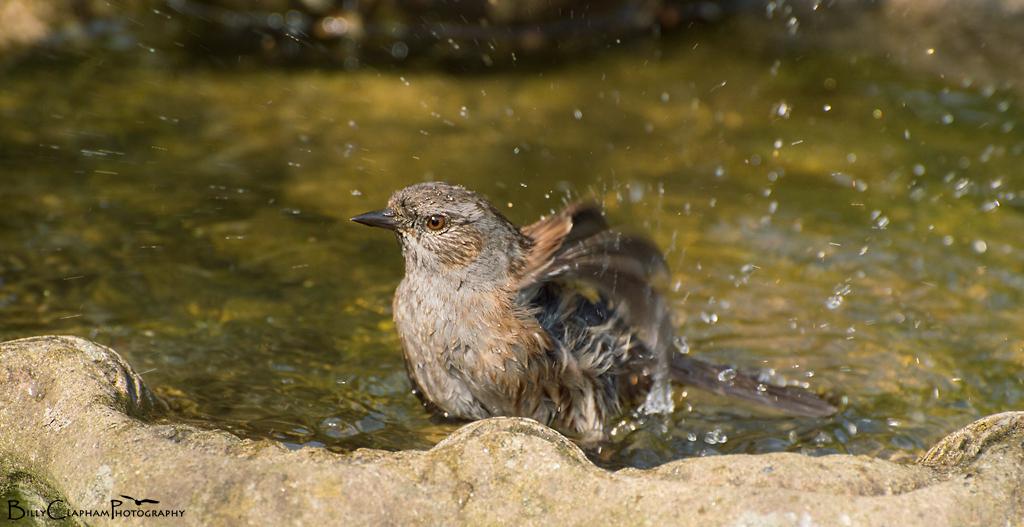