Between 2006 and 2013 I was the proud owner of a little marine aquarium, which after some initial ignorance followed by a steep learning curve eventually turned from a plastic-fantastic fish tank into a miniature reef ecosystem! But starting University in 2012 meant leaving it at home with my parents to take care of it; they did a good job, but after a year at uni it seemed unfair for them to keep pouring effort into maintaining the tank which just sat in my bedroom with no one there to see it, so I made the decision to sell everything off and shut it down last summer.

The fish and critters were endlessly interesting to watch, and you may think it’s a bit of an over statement to call it a “miniature ecosystem”, while OK there was a fair amount of human intervention, it still kind of was! It contained around 10kg of live rock, which gains its name from the 1000’s of microorganisms that lived inside its porous structure; from nitrifying bacteria to little skittish amphipods, to algae munching stomatella snails. Live rock forms the basis for the biological filtration of the tank turning dangerous ammonia from fish waste into harmless nitrogen gas, and harboring many useful critters that provide services from eating fish poo, to being fish food! All I really did was add nutrients in the form of fish food and gave a helping hand in removing some nutrients in the form of water changes and a bag of filter media, the live rock and critters in the tank did most of the work!
All sorts of stuff can turn up on live rock, the two shots below are a close up of a fan worm around 1cm in width and of a stomatella snail cruising over some tiny shell forming fan worms on the aquarium glass. 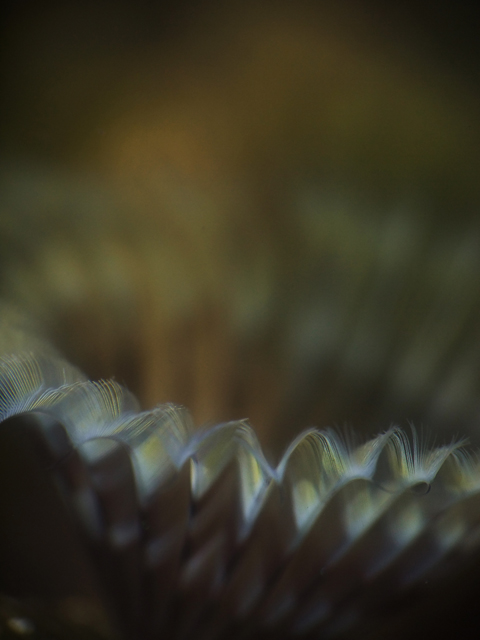 However not everything that turns up on live rock is all together good news, this little hitchhiking mantis shrimp came as quite a surprise! It wasn’t big enough to take on my fish, but I do have suspicions that it was bothering my corals! Despite mantis shrimps being a bit of a nightmare for reef keepers, it was pretty exciting to see such an awesome creature in the flesh! They have extremely sophisticated eye sight, nothing like our own; although recently it was found that they couldn’t see the massive range of colours we thought they could, their eyes are still pretty impressive! But the capabilities of their forearms is what is really to be revered, with capabilities  of producing 1,500 newtons of force and temperatures hot enough to create bursts of light!

Some critters, however, I did purposely add to the tank to be a useful part of the ecosystem, in the fishkeeping world they are affectionately known as the “clean-up-crew”. Snails and hermit crabs wombled around the tank eating algae, excess fish food and any other detritus they could get their mits on. The hermit crabs also provided ample entertainment as they scaled shear cliffs, trapeze walked power head cables and did the odd bit of toppling over! 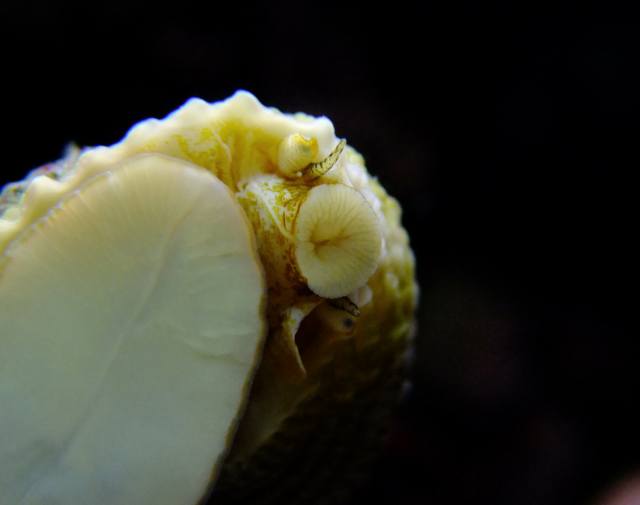 A skunk cleaner shrimp actively scurried around the rocks and occasionally offered its symbiotic services to my clownfish, giving them a quick once over removing any parasites and dirt. This shot of the cleaner shrimp is one of the few shots of the tank that was taken with my Nikon D3200, the rest so far were all taken with my old Fujifilm finepix S200EXR bridge camera with a Raynox-DCR250 macro extension lens. (any shots marked with an asterisk* below them were taken with the Nikon and not the fuji if anyone’s interested!)

For a while I owned a coco worm which I had to supplement feed phytoplankton, which its feathery filamentous feeding apparatus filtered out of the water column, along with anything else it could catch that was already in the system. 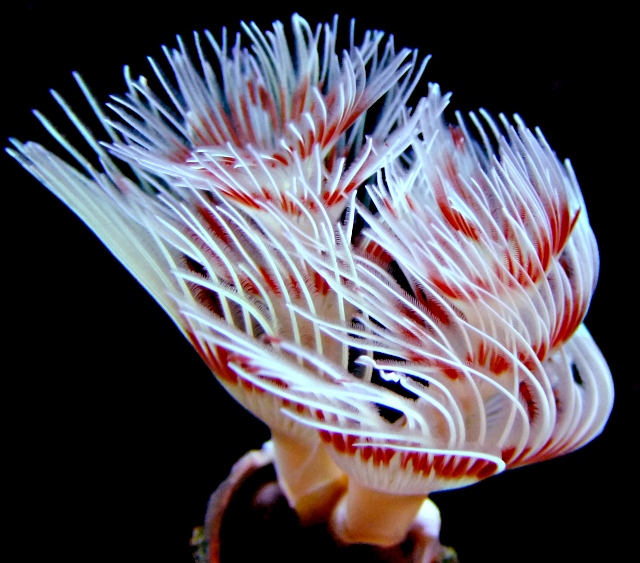 For a long time I struggled to keep corals, but eventually a combination of bad starts, bad luck, mantis shrimps beating them up, and occasional incompetence finally gave way, and I managed to grow decent colonies of some nice soft corals! LED lights supplied their symbiotic zooxanthellae algae with the energy to photosynthesise and nutrients supplied once again from my messy fish helped them to thrive. The tank only contained simple soft corals like mushroom corals, button polyps and xenia… eventually when I get back to reefkeeping, I will definitely be going all out with stony corals and everything…. one day! 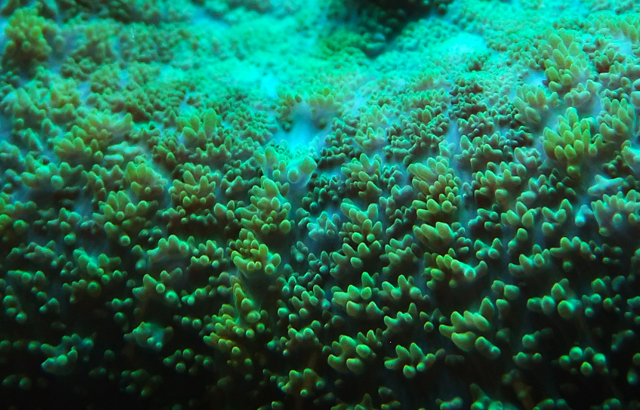 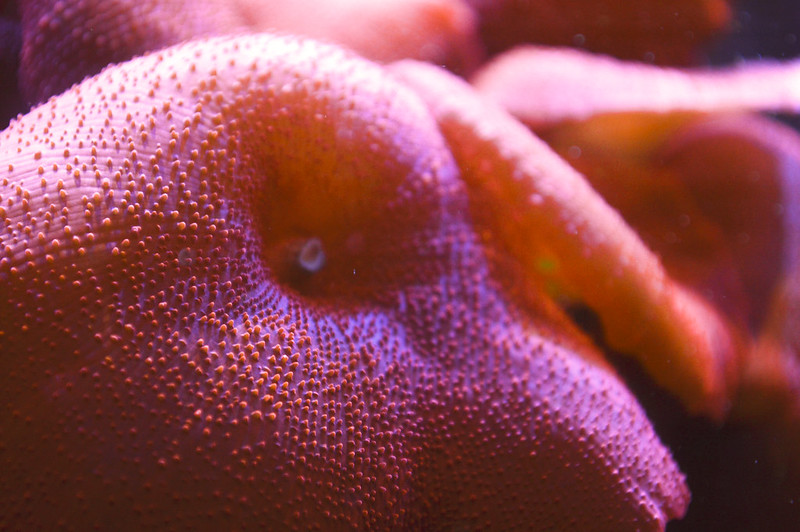 Finally to the fish! A number of fish passed through my tank in its time: my first two fish, yellow tail blue damselfish, had to be removed due to them getting a bit too aggressive, a pair of tiny clownfish unfortunately died in a ammonia spike, and one of my favourite ever occupants, a  truly psychedelic  spotted mandarinfish (seriously, if a creator were responsible for such things then they would of have to have been high…), I had to give up because it just wasn’t thriving well in the tank, it wouldn’t take to prepared foods at all! The eventual long term occupants of my tank however were a pair of black and white clownfish, which went on to spawn regularly, and a pretty, but unfortunately shy, firefish. Watching the interactions between the clown pair was probably the highlight of owning the tank, they definitely had personality! 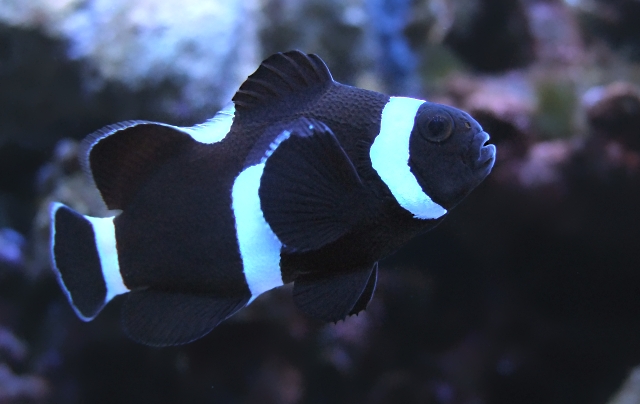 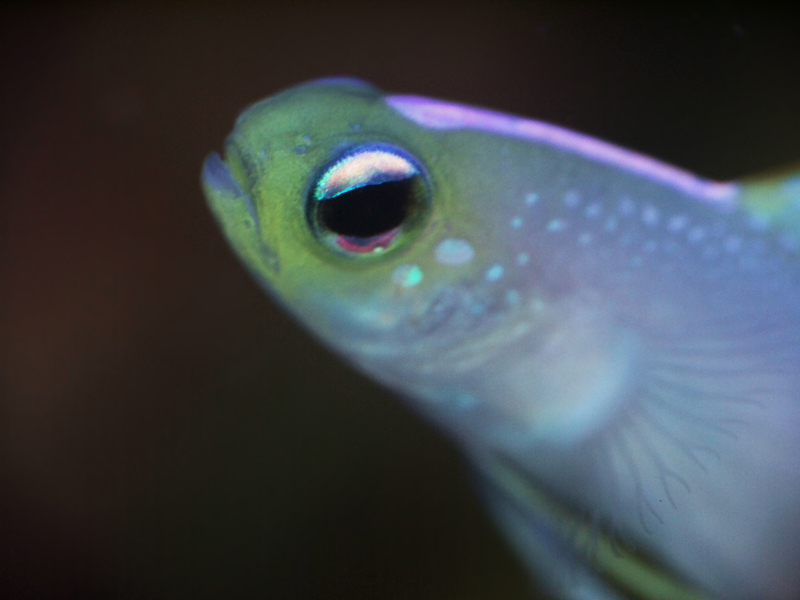 The aquarium was always challenging to photograph, wide open apertures and high ISOs were always required to even be in with a chance of getting a sharp shot (which was especially difficult with the old fuji bridge camera), and of course then it also required the animals to play ball! But it also acted as a mini studio and microcosm, allowing me to peer into another very different world; a little slice of ocean from half way around the world, that I could watch from the comfort of my own bed.

Getting to grips with the 70-300VR in Sheffield Botanical Gardens
Edinburgh in Black and White
%d bloggers like this: